Citizens’ Assemblies – how do we make them inclusive

Extinction Rebellion Webinar on Climate Assembly UK – PART 1: What is a Citizens’ Assembly

PART 1 is an introduction to Citizens’ Assemblies: what they are and why we need one to tackle the climate and ecological emergency.

Part 2 of the webinar covers the basics of Climate Assembly UK and XR’s key objections on its framing.

The last part of this webinar includes reflections by three observers of Climate Assembly UK, their thoughts about the process so far and what they hope for the future.

Local Deliberations: A Participant’s Perspective on Camden Council’s Assembly on the Climate Crisis

Anna Pick recounts her experience as a participant in Camden Council’s Citizens Assembly on the climate crisis in July 2019.

Dr Marie-Claire Brisbois is an academic in Energy Policy at SPRU, University of Sussex and Co-Director of Sussex Energy Group. Her work examines questions of power, politics and influence in energy, water and climate governance contexts. Here, Dr Marie-Claire Brisbois gives her personal and professional perspectives on how CAs – as one of the many forms of participative democracy – can be the vehicle through which transformative policy change for the Climate and Ecological Emergency can be addressed. Here is her expert perspective on Extinction Rebellion’s 3rd Demand.

Andy Paice tells us his experiences in setting up and running deliberative democracy initiatives in Newham through community assemblies with special focus on Newham’s Citizens’ Assembly on Climate Change.

Government must create and be led by the decisions of a Citizens’ Assembly on climate and ecological justice.

We do this by creating outreach materials, spreading the word through talks and events as well as campaigning for the Climate and Ecological Emergency parliamentary bill, calling for a UK-wide Citizens’ Assembly.

This is a big job and we could always do with a little help. Whether you have experience public speaking, writing copy, working in politics or you have time and want to lend a hand where you can, then buzzzzzzz on over and get in touch. Also if you have press or research enquiries you can find us at the same place: 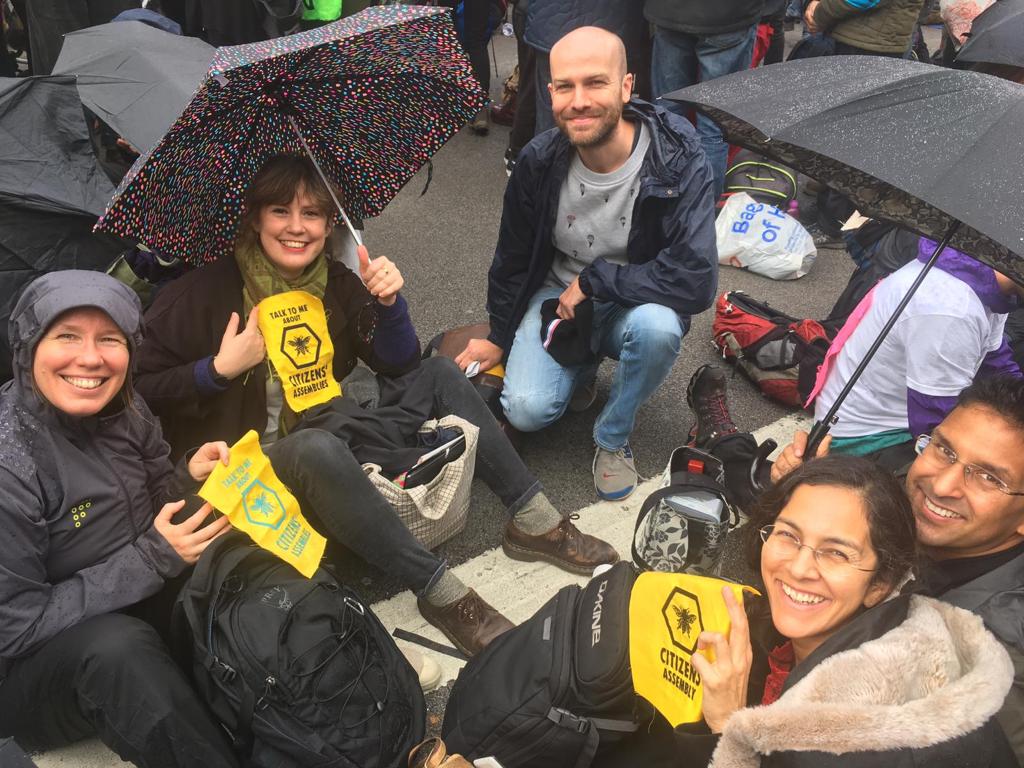 Today 7 of my friends were found guilty of acting to save the planet. They used exactly the same tactics as the Suffragettes, and now face prison. You might be demonising climate activists now, but you’ll be thanking us in the future. You’ll be wishing you acted with us.

The Billionaire-owned press lie about activists the same way they lie about trade unionists.

It’s always “these awful people are disrupting your life and causing harm!”

They’re terrified of you agreeing with us because then things might change for good.

Rich people want to keep getting richer, powerful people want to stay in power, and to do all this working people must continue to work at the maximum capacity the aforementioned can get away with to enable the economy to grind on as organised. EVERYTHING else is secondary

📽️#XRSouthEastUK remind @bp_plc it's time to #CutTheTiesToFossilFuels! Since 1967 BP have funded the #TuftonStreet think tank the Institute of Economic Affairs which opposes action on #ClimateChange and targets government with misinformation about the fossil fuel economy.

Airoplanes are no mean of transport for common people. 80% of people never ever went anywhere by plane. Only one very wealthy percent is responsible for about of emissions caused by air traffic.
#A22Network